As usual with Eric’s Wassail, the weather proved kind to us with a dry, if chilly evening. The media were well represented with both BBC Radio and the print media being present.

At the appointed hour the gathered might of Lassington Oak were there and ready to take on the wandering challengers from the Forest of Dean Morris Men (no doubt plotting how to steal back young Tom). We started off with a lusty Bluebells, managing to stay upright on the sloping ground. Forest took theie turn and we responded with Idbury Hill. The gloves were off and Forest danced again, this time in the darkness as the lights went out as they started to dance. Light back on and we were off with the Upton Hanky dance – our final dance of the night. Again Forest were up for their last dance and – the lights went out again!

Dancing done, light restored we donned our wellies and tatters and made our way to the orchard, carrying flaming brands, to wassail the apple trees. The Judas fire was lit and duly stamped out by the marauding morris men (top tip of the evening – remove bells before stomping around in a fire!). The ring of fire was light around the tree and words were said, songs were sung, more fire was lit and we processed around the tree three times singing and making as much din as possible. The wassail bowl was passed among the gathered masses and the proceedings brought to an end by three shotgun blasts. 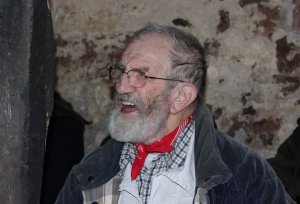 Returning to the farmyard we were met with mulled cider and a table full of goodies to munch upon. As the evening got colder and the food ran low people drifted off home and the hardcore made their way to the undercroft of the house to sing and play music until the early hours. Dave Blick sang the Rose in honour of a friend of the farm, a young lady who worked there and has now been struck down by serious illness.
Even Eric sang a song, at which point his dog came in and laid at his feet (his master’s voice calls).

The tunes and songs drifted into the early hours and so ended another fantastic evening of wassailing at Eric’s.