It is with great sadness that we pass on the news that long term member, Gerald Tween, passed away recently following ongoing health problems but thankfully with no Covid infection. He now rests at peace with his wife Val, who passed away a couple of years ago. Our condolences go to his family, who fortunately were able to be with him when he died.

Gerald joined the side as a new dancer in 1980 and soon settled in, not only as a dancer, but also a musician both for the dancing and the traditional after dancing music sessions, where he could also provide a song or two. The one that sticks in my memory was maybe not the most traditional folk song, but “‘Ave you got a Loight boy” was always a firm favourite with the audience and the morrismen, who joined in heartily with the chorus. A very regular attendee, not only at practices but also at bookings or weekends, Gerald became a stalwart of the side and could always be relied upon to turn out. This resulted in his election to the role of Squire in 1986, a post which he served in for two years.

As well as playing a large role in the Morris, Gerald was also a key figure in the annual Mummers play which the side performs just before Christmas every year. In the early days he would bring along plays from different villages which continued until he was given a copy of the newly rediscovered Highnam Mummers Play as performed by a team from the village where Lassington Oak now practice. Gerald always played the role of King George, so it was a shock to our system when one of us had to learn the words several years ago when he no longer felt able to undertake the part to his satisfaction and retired. Such was his interest in Mumming that in 2012 he collated his collection of plays and published them as a book entitled “Step In”.

Most impressive of all is that Gerald undertook all this activity whilst being partially sighted. He was rarely in the wrong place in the dance set and knew where his stick should be, often a struggle for those in the side with perfect sight.

As a consequence of his sight defect, Gerald took up a career in Social Services where he served on several committees and he was also a keen supporter of the Talking Books for the Blind.

His perseverance and dogged determination were apparent to everyone he met and Gerald was, and will continue to be, an inspiration to all who knew him.

As I said we weren’t able to dance out this May Day but created two small videos which were shared via our FaceBookpage. But for those of you without FB then here are screen grabs from each video and links to the clips on YouTube .

First is the official one, the montage of us all doing our Shepherd Hey jig https://www.youtube.com/watch?v=GGg_ApMpjxc

The second link is Tom’s back up plan and the only team we are aware of who actually danced together on May Day, legally! https://www.youtube.com/watch?v=u3GWc__LkAA&t=65s

Saturday 1st July saw us head out with Ragged and Old Morris and a couple of reps from White Hart Morris for a day of dancing in Gloucester and Cheltenham.

Starting in Gloucester docks we danced outside The Lord High Constable and then Mariners Square, moving on to The Cross in Gloucester City centre. A quick visit to the New Inn and then our final spot of the morning in Kings Square. A coach then whisked us off to the Sandford Park Ale House in Cheltenham for a lovely lunch and fine ale followed by a few songs and tunes. Dancing in Cheltenham started in Cambray Place before moving on to Regent Street. The final dance spot saw us on The Prom where we were joined by Tattered Court morris. The coach then ferried us back to Gloucester to the Pelican, where we relaxed with a beer and entertained with a few more dances. The day finished at The Fountain for an excellent chilli and a session for those that wanted to carry on.

Sounds busy? Well actually it was very relaxed, with only a couple of dances at each spot. Everyone seemed to enjoy the day, I know I certanly did! 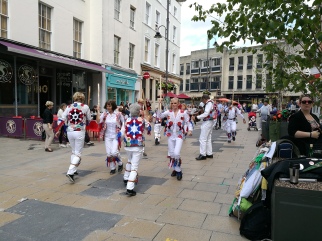 Happy May Day to one and all

A big thank you to those hardy folk who turned out yet again to watch the assembled Morris family welcome in the Summer (?!) on the summit of May Hill. With clouds covering the sky, it was not a classic day, but it stayed dry and it was reasonably balmy (as much as 5.20 am on a hill in the cloud can be), so that’s two positives.

The May Day regulars of Forest of Dean MM and Lassington Oak MM were this year joined by Wild Oats Morris and new, Cheltenham based, side The Tattered Court; plus not forgetting Joe from Anker MM and Ian from Wickham Morris.

Dancing started at 5.20 am with the Morris call played by Gillian Guest (Bottom photo) and at some point the clouds got lighter, so the sun must have risen. We duly waved to our friends Kits Coty Morris in Maidstone and then to Stoud Morris and Gloucestershire MM on Painswick beacon. Bill also had a phone interview with BBC Radio Gloucestershire (Yes you can get signal!!), which some of you early risers may have heard.

The morning festivities were capped with the now traditional breakfast at May Hill Village Hall. A big thank you to all the volunteers who fed and watered us yet again and a big thank you also to the musicians and singers who entertained after breakfast. 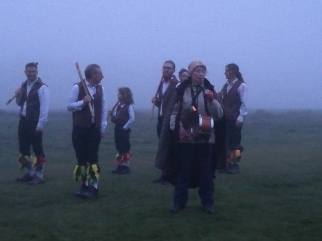 Following a fairly busy St Georges weekend last week and our first Wednesday dance out, this weekend began with our annual trip to the Upton upon Severn Folk Festival. The weather was kind, not too hot nor too cold, with no interruptions for rain. We had a good turn out and I believe the Foreman was happy with the dancing. Our second session saw us dancing a few spots with the excellent Pecsaetan Morris from Sheffield. Hopefully we held our own against their high standard of dance.

Tomorrow, we will be up before the crack of dawn to welcome in the May and see the sun rising. Fingers crossed the clouds give us a break and we actually get see that amazing event 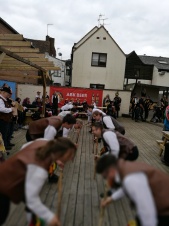 Our dancing season is finally underway, we danced at the White Hart in Maisemore it got a bit chilly and dark towards the end but we warmed up with a great session in the pub afterwards here’s looking forward to a great season. Next week we will be at the Badger at Eastington.

We danced out on Saturday at St Georges Church Hall in Brockworth. The boys turned out in good form (mostly) and the performance was well received. Good to get out and dance in the sunshine again its been a long practice season. This Wednesday we will be at the White Hart in Maismore from 20:00. 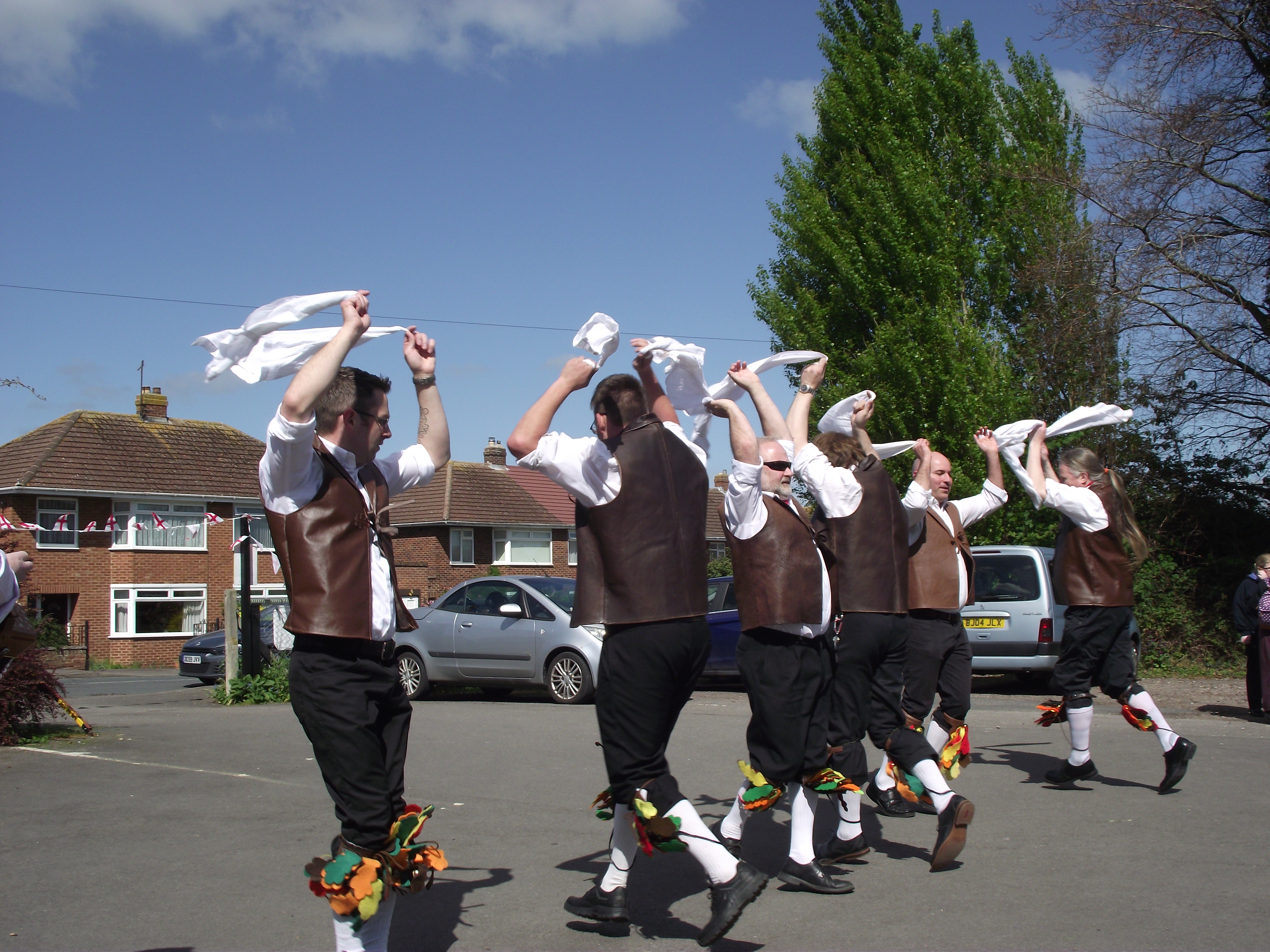 The mumming season is upon us again, due to a slight change of plans Lassington Oak Mummers are Mumming on the 9th of December in and around Ledbury. 8:00pm at the Beauchamp Arms in Dymock, 9:00pm at the Prince of Wales in Ledbury then finally on to the Talbot in Ledbury at 9:45pm.

The following week on the 16th December we are planning on Mumming in Gloucester. 8:00pm outside Cafe Rene, 8:30pm at the Cross Keys, 9:00pm at the Dick Whittington and then finishing at the Fountain at 9:45pm.

All times are approximate as herding Mummers is akin to herding Morris men but with more costumes and face paint.

Come and Dance for Apple Day

Lassington Oak Morris Men are holding an informal Morris dance workshop teaching Cotswold and Border dancing as part of the Apple Day celebrations at Gloucester Folk Museum. No previous experience needed come and give it a go!

The practice season has begun so learn to morris dance with the energetic and friendly Lassington Oak Morris Men. Members of all ages welcome. Keep fit and drink ale at the same time. Best of all it’s completely free!

Just turn up and give it a go or email bagman.lassingtonoakmm@gmail.com for more information.