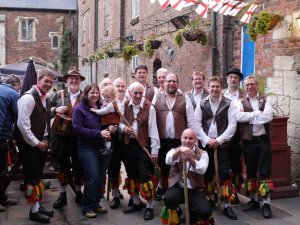 The bunting was up, the flags were out. It was Saint George’s day and Lassington were heading to the Café René in Gloucester for a rendezvous with the assembled might of Stroud Morris.

We arrived at the appointed hour to start dancing at 7.30, we bought ale and waited for all to arrive. 7.30 came and went and off we went a-dancing at 7.45. We started by gathering ourselves into the set number one gave us a quick run down of the form – half-gyp, back-to-back, rounds – and off we went a good neat walk on and into Balance the Straw. Although space was tight we pulled off our first dance at the official unofficial start of the dancing season. Stroud quickly followed on and we then countered with Sherriff’s Ride. This to-ing and fro-ing went on and we threw in the likes of Black Joke, Vandals of Hammerwich Upton Hanky and it all ended with smile and a massed dance of Bonny Green. The season had started. Hankies had been presented by Stroud to their newest of dancers – three in total. Lassington took the time to pose for the photograph shown above.  The intention is to publish photos each time we dance out.  Do come back here to fins out where we are going to be dancing next, and what we have been unto.

The dancing went really well for our first time out this season, it carried most of the energy we were getting into the dances during practice. Lines need watching still and a little consideration to dancing as a set, not as individuals, so the set can move and adjust to obstacles – the courtyard of the Rene is long but narrow.

After just over an hour of dancing we retired to our usual haunt of the Fountain for a few tunes, songs and ale – we did not stay around at the Rene as there was a rock band starting at 9 and we did not want to show them up! Stroud graciously joined us and contributed to the session with their musicians joining in with many of the tunes and leading a few. There was even a few songs sung, even I sang (I must do this more regularly to get better). My eldest boy was even inspired to pick up the whistle and join in a couple of the tunes.

All in all a solid start to the dancing season, it all bodes well for a fun summer. The programme is out and on the Lassington page and we are looking forward to having a cracking season.

Next up is seeing in the dawn at May Hill next Thursday (May morn) followed by some dancing in Gloucester, then on to Painswick…